The Benefits of Television For Your Dog

Follow as Chloe DiVita, All Pet Voices Co-Founder, chats with Joe Meyers, DOGTV Digital Marketing Director, on the differences between how dogs and humans see the world as well as how TV might actually be beneficial to dogs.

Hello and welcome to Pet Voices LIVE and today we have with us DOGTV. I am Chloe, I’m your host and I am excited to welcome Joe Meyers, who’s the Director of Marketing for DOGTV. And we’re going to get into kind of everything about DOGTV, which is television for your dogs, and it has more benefits than I think a lot of people realize.

And one of the most interesting things, Joe, that I’d like to start talking about is it’s actually founded on science. Right? There’s facts. So first, welcome, and thanks for being here. And let’s talk about some of these facts. Share with us some things that are going to just surprise people.

Thank you so much, Chloe, for having us. Absolute pleasure to be on the show. And to be with your audience.

So let’s talk science. I am not a scientist. I am not a behaviorist, but we know a whole bunch of them. Seven years ago when DOGTV was founded, we knocked on the door of one of the leading Animal Behaviorists in the world, Dr. Nicholas Dodman, and said, “We’re creating this channel and we want to build it from the ground up using science. So using primary research and secondary papers, how do dogs see? Do they see the same colors we do? What refresh rate when you’re looking at a TV? Is it flashing on the screen? Are they able to see that? How are dogs hearing? What tones can they hear? Do they want to see things more relaxing?”

And so DOGTV is based on more than, and we add a couple every year, more than 60 scientific studies. We have four patents. So because of all these studies, all this information we learned about how dogs see. They don’t see in black and white. They actually see with blue and yellow, so if your dog sees something red, it’s gray to him. And so when we’re filming DOGTV, we actually shift all the colors so your dog can see it. It’s more vivid.

So 60 scientific studies and growing. And also we have four patents that protect this technology and how we deliver it to the dog consumers. So we are huge dog nerds. And we talked with and worked with some of the leading behaviorists and scientists in the space to make sure that that content that’s on your screen when you leave, or when you’re on a zoom call is the best thing possible.

I love that because it’s such an interesting take. Before I learned of DOGTV and some of the science behind it about how dogs see and hear and how they process it. I always thought for some reason they saw in black and white and I don’t know where that came from. I have no idea why I thought that, but I did. And I know on your site there was a really interesting visual that kind of shows how we see versus how they see. And then that kind of goes into how you create the content, which I think is interesting. Like, how do you even do that? How do you say, “I’m gonna film this one way and then tweak the colors, so it looks right for a dog?” That’s what happens right?

I’m not a scientist or a film creator or a content creator. But what I’ve seen is, given our patent I can’t give away too much for that, we’re similar in the way hearing aids work. Hearing aids you hear in a certain frequency. And dogs, it’s kind of the same thing they see in these certain frequencies and so we just adjust it. So that red ball is now a blue ball, so the dog can see it and it’s not gray. If we showed a red ball to your dog, it would be a gray, just sitting there, nothing, ball, so we sort of move the frequencies of color to where the dogs can actually see them, enjoy them, and engage with them.

Which is funny because I think as a human, if we put on DOGTV, it will look a little weird to us. Because it’s made for the dog. It’s made with a dog in mind. I’m sure you hear that.

Your dog might sit there and watch it for… we’ve had some dogs who just glew their eyes to it. They’re watching at 85% to 90% of the time, and then some dogs, it’s sort of background noise and something is interesting and they’ll look up like, “Oh, what’s that?” And then they’ll go back to playing with a toy or exploring your home.

So knowing that, what are some of the benefits of using and having DOGTV for your dog?

BENEFITS OF TV FOR DOGS

I think the first one is peace of mind. And pet parents were researching the best food, the best leashes, the best supplements, the best daycares. I mean the list goes on and on. And so those times when you have to leave your dog, which are few and far between now, you want to make sure you’ve done the best to give them a comforting environment that’s consistent. It’s the same thing. Dogs love routine. They love getting fed at the same time, taking a walk at the same time. It just helps them and so when you’re able to leave, you click it on. It’s beautiful. It’s relaxing. We do have some exposure therapy in there. So the dogs are able to see things and get used to the world outside of your walls. Some entertainment but then relaxation.

So I would say a perfect benefit for them to relax. Reduce separation anxiety. Be a constant thing in their life. And then that ability for you to turn it on and know that you’re turning on this massive library that’s been based on science.

Yep. I love that. And I think it’s quite timely. We were talking before about how you have the Five Day DOGTV challenge, which is a great intro, I think, for people. So talk about that for a minute. What is it that you’re challenging people to do?

Certainly, and it sort of came to be because we saw some tremendous growth last month to this month. The company has been founded on the fact that when you leave your dog you turn on DOGTV, but the majority of people are home now. And so we saw a huge influx of new DOGTV pack members and we loved it. But with more people, and because the channel is not, you know, don’t just turn it on and it’s entertainment, it’s a little more there. We created five days to have success with DOGTV.

So Day One is you turn it on, and you sit down with your dog and you watch it just like with a new toy, or a new treat, or some new food, they want to know that this is for them. They have approval. And that what’s on that screen is designed for them. It’s sort of like, “Oh, this is mine?” and getting that seal of approval.

Day Two is you turn it on and you go to the other room, and they’re still watching it. They’re engaging with it. We walk you through this Five Day Challenge. And by day five, you turn it on, your dog watches it, maybe you have to walk and go to the grocery store, you have to leave for the day and your dog is entertained. You’ll see reduced anxiety. You’ll see more tail wags and see a happier demeanor on the dog. And we stand behind it. We’re offering a $10 Amazon gift card for anybody who completes out with an active DOGTV subscription, so we stand behind it. That’s your first month completely on us. You can contact our support team, you can message us on Facebook, if you’re interested in that, or if you go online, there’s a chat bot there and it’ll walk you through it as well.

That’s great. So hear that everybody? $10 on Amazon to complete a Five Day Challenge that sounds like it’d be awesome bonding time.

100% yeah. A sneak peek, this doesn’t get you Day Five already, but Day Five is just relaxing with your dog on the couch, knowing that you’re trying to do the best things for them. You’re giving them some love, even though you maybe can’t be there with them when you’re on a zoom call. You’re comforting them. And parts of the day you’re entertaining them. There’s bouncing balls. There’s dogs in parks. Most of it is shot from the dog’s perspective. So it’s not the Weather Channel. It’s your dog’s television. You’re entertaining them and giving them comfort.

And I’ve watched some DOGTV and I find it kind of relaxing. So I think it’s great.

During this season, we could all use a little more relaxation. And so you know, it’s a perfect thing for your dog but we have a lot of pet parents that are just sitting there, have it on in the background all day. All the music is composed by our own internal team and our team of Grammy Award winning composers. So it’s all created with your dog in mind, but relaxation helps everything.

So I know that the DOGTV, well first of all this is a little sneak peek for everybody, we are actually partnering with DOGTV on All Pet Game Night. One of the things we’re able to offer is if you go to dogtv.com/allpetvoices, you’re going to be able to sign up and get a month for free.

And so in terms of where because I know this is a question that comes up. “Where do I sign up and then how do I get it on my TV? Like, is it a channel? Is it this?” So talk for a minute about the places that once somebody signs up, they have the availability to watch.

Certainly. So thank you All Pet Voices for partnering with us on that. We’re so grateful to give you guys that 30 day trial. So when you go to dogtv.com/allpetvoices, you’re able to sign in. And that’s your universal login all across. So you have an iOS, Android, Apple, Roku, Amazon, all of those devices will have the app store, or something similar to that. Android Play. In Roku, I think it’s an app as well. So search for DOGTV, download the app, use the login that you get from dogtv.com/allpetvoices, and you have access on all those platforms for your fur family members.

Find out more about the benefits of television for dogs and DOGTV by watching the full video above!

For more information on DOGTV:

Pet Lovers Gather Online for Fun, Games, and Prizes
Next Post: What To Do About Your Anxious Pet 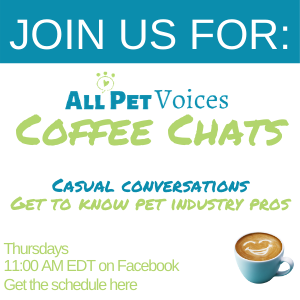