How Wild Cats Became the Pets We Know Today – A History

This post is written by guest author, Allison Hunter-Frederick, from Lincoln Pet Culture. 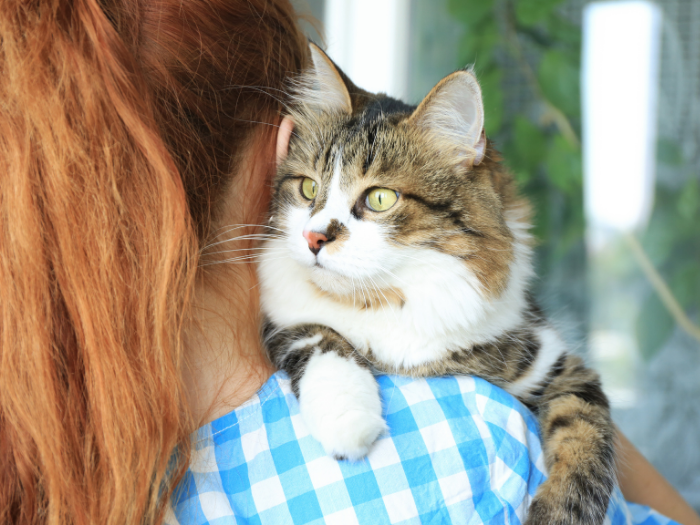 How did wild cats become house pets? Current evidence shows that cats were domesticated over 10,000 years ago in the Middle East. Prior to this evidence, the traditional viewpoint was that cat domestication occurred about 4,000 years ago in Egypt. In either case, the belief is that cats began hanging around people in farming communities and, in doing so, cats domesticated themselves as they formed a mutually beneficial relationship with people as rodent control.

The earliest evidence of domestication points to the Mediterranean island of Cyprus where in 1983 archeologists unearthed a cat’s jawbone dating 8,000 years ago. Smithsonian Magazine quotes author Desmond Morris as saying that it’s unlikely that people would have brought wild cats over to the island (“a spitting, scratching, panic-stricken wild feline would have been the last kind of boat companion they would have wanted”), and so the finding suggests that domestication actually occurred further back than 8,000 years ago.

The most recent evidence for the origin of cat domestication was discovered in 2004: Jean-Denis Vigne of the National Museum of Natural History in Paris and his colleagues unearthed a grave in Cyprus belonging to an adult human of unknown gender. Accompanying the body were an assortment of items and just 40 centimeters away was an eight-month-old cat in its own tiny grave. The cat’s body was oriented in the same direction as the human’s and is believed to have been deliberately buried with the human.

A 2009 study published by the Pub Med Central contends that because cats are not native to Cyprus, people must have brought them over by boat, probably from the nearby Levantine coast. The authors explain, “Together the transport of cats to the island and the burial of the human with a cat indicate that people had a special, intentional relationship with cats nearly 10,000 years ago in some parts of the Middle East.”

The authors note that the date of 10,000 years is logical, because this is when the first agricultural societies began to flourish in the Middle East’s Fertile Crescent. People began to develop stores of grain in the region, which caused a rise in the population of the house mouse and, in turn, attracted cats to people. The authors add that “the trash heaps on the outskirts of town were probably as great a draw, providing year-round pickings for those felines resourceful enough to seek them out. Both food sources would have encouraged wildcats to adapt to living with people.” 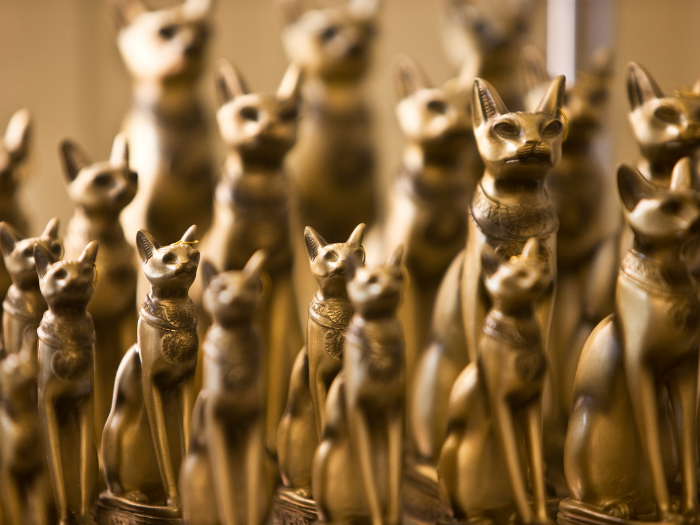 Although cat domestication is now believed to have started in the Fertile Crescent, the country of Egypt is still considered to have played a pivotal role. Numerous Egyptian paintings from 3,600 years ago show cats poised under chairs, sometimes collared or tethered, and often eating from bowls or feeding on scraps. These paintings suggest that cats were common Egyptian household members.

In addition, by 2,900 years ago, the domestic cat had become the official deity of Egypt in the form of the goddess Bastet. The 2009 Ped Med Central study contends that the volume of cat mummies discovered buried at Bastet’s sacred city indicates that Egyptians were actively breeding domestic cats.

Finally, skulls of cats found in Egyptian cat burial grounds have been identified as mainly being of the species Felis sylvestris lybica, and it is this African wildcat that is thought to be the major ancestor of the modern-day Felis catus. But their presence in these burial grounds suggest that these wildcats were in fact domesticated.

Skip ahead to 2,000 years ago and there is increasing evidence of cats spreading throughout Europe. According to National Geographic, people probably began carrying their cats along ancient land and sea trade routes to control rodents.

The 2009 Ped Med Central study theorizes that because small wildcats did little obvious harm, people probably didn’t mind their company, and might have even encouraged the cats to stick around for rodent and snake control. The authors speculate that because these cats possessed “cute” features they elicited nurturing, which also preadapted them to developing a relationship with people.

On the opposite side of the globe, according to the 2009 Ped Med Central study, there is evidence that domestic cats had also spread to Asia 2,000 years ago, via well-established trade routes. The authors say that in the absence of any native wildcats and without the help of selective breeding distinct breeds began to emerge naturally. The breeds include the Siamese, the Korat, and the Birman. 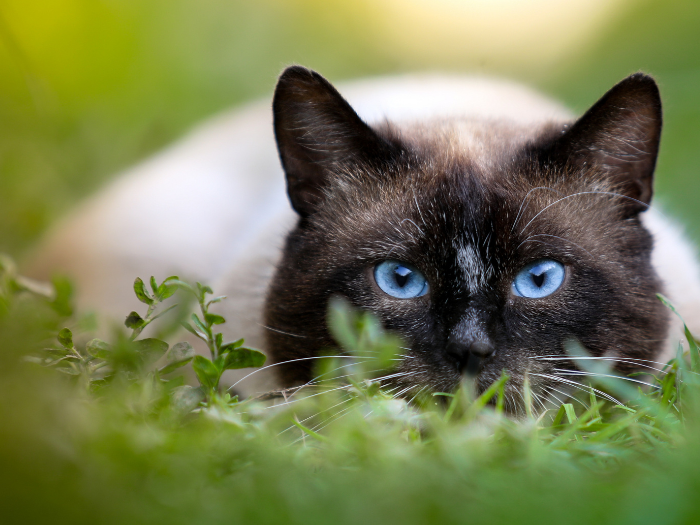 According to National Geographic, wild and domestic cats originally didn’t show any major differences in their genetic makeup, but a tabby coat marking proved one of the few traits for distinguishing them. In the 18th century, the markings apparently became common enough to be associated with domestic cats.

The common belief is that in the 19th century, cat fanciers in the British Isles began breeding cats with particular traits, which led to the modern fancy breeds. Although cat shows may have been held prior to this time, Mental Floss says that the event that “put cat shows on the map” was a national competition at London’s Crystal Palace in July 1871. This event reportedly showcased between 150 and 210 breeds and drew a crowd of 200,000 guests.

Cat historian, Paul Koudounaris, says that many cats came to North America by ship with early colonists. “Known as ship cats, they were used to get rid of rodents and protect the boat’s food supply,” writes Milwaukee Public Media in their interview with Koudounaris.

On land, colonists also used them for their hunting skills, as did the U.S. Army. Over time, Koudounaris says, cats grew to be viewed as companion animals, due to their popularity with cowboys and authors. 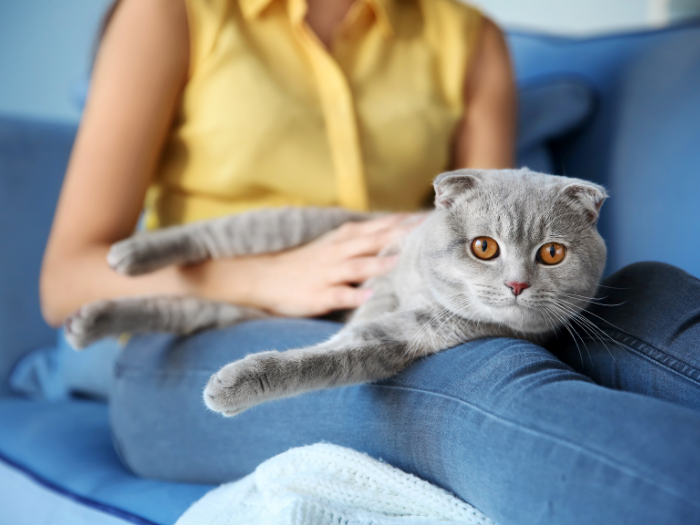 Today there are 373 million pet cats in the world. The two main current theories as to their domestication is that either the original wildcats (Felis sylvestris lybica) were deliberately tamed and selected for friendliness, or that the original wildcats gradually diverged into house cats through adaptation to people because of their rodent control abilities. Whichever the case, cats have become a domesticated companion with minimal change in their genetics, and that is part of what annoys us about them while also endearing them to us.

About the Author: Allison Hunter-Frederick is a cat behavior coach, cat therapy handler, and pet education blogger. Her articles have been published in local and national publications, as well as on her blog, Lincoln Pet Culture. Through her business, Allison Helps Cats LLC, she uses her research-based, positive reinforcement coaching approach to help cat owners improve their relationships with their cats.

5 Benefits of Goat Milk for Puppies and Kittens
Next Post: 10 Facts About Sphynx Cats 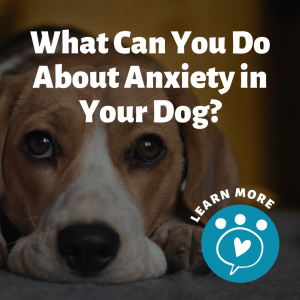 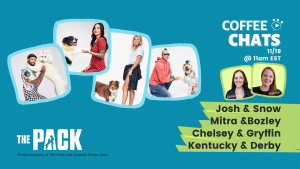 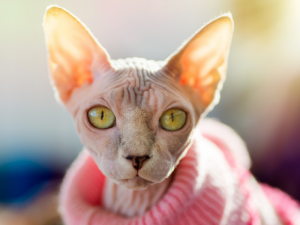 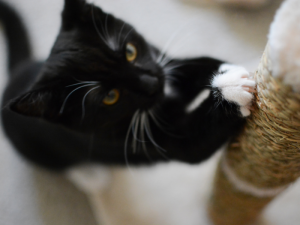