Tune in as Chloe DiVita, All Pet Voices Co-Founder, talks with BlogPaws Founders: Yvonne DiVita, Tom Collins, and Caroline Golon about the memories of BlogPaws Conferences, community, and education.

Hello and welcome to Pet Voices LIVE where we have the BlogPaws co-founders today. I’m your host Chloe DiVita, former Executive Team Member of BlogPaws and I will get into how that that plays into this, but I am thrilled and I think so many people are thrilled that we have my mother, Yvonne DiVita, which real quick side story whenever people are like how’d you get to the pet industry? I always say it’s my mom’s fault.

So my mom is here. We have Caroline Golon here, and we have Tom Collins, Yvonne’s partner in crime in life and in business, wearing his – you’ve got THE t-shirt on, you know everybody missed the t-shirt. You got that one on I got a little staff shirt. We’re all BlogPaws geared out.

Okay, so let’s start at the beginning because there is a pre-story to BlogPaws and how it came about. And it starts more with my mom, Yvonne, and Caroline. So tell us a little bit, Mom, I’ll start with you. And then Caroline chime in on how the two of you connected?

Here’s the exciting thing for me to remember, Caroline, is that I had this little pet blog that I pitched to Nestle Purina. And it was a really crazy time for Tom and I because we loved blogging. But pet blogging wasn’t something we did at the time. And I convinced them to sponsor my blog. I said, I’ll start a pet blog, you sponsor it. And they said, okay, and they paid us a lot of money. And it was through that, I think, that I discovered Romeo the Cat. You connected with me, and I think we had a phone conversation where we wanted to get to know each other and hear the story of – I want to hear about Romeo the Cat. Now, we have to go back to the fact that Romeo the Cat was the biggest and most visible icon before Snotface the ferret.

But, Caroline, do you remember it that way?

It was pretty exciting. I mean, I think, you know Romeo was, before I started the blog, he was a Twitter cat. And that’s when Twitter was just exploding. I think a lot of BlogPaws members and community members were probably part of that. The anipals. You know, we had Twitter parties and raised money for animal rescues all over the world. We had, oh my gosh, we had people from everywhere. And so that was just so fun, and such a wonderful group that came together and, again, in like 2009 it was crazy. Like, it was the Wild West for Twitter and Social Media. And then all of these animals were on social media that was even crazier. And I think that might have been initially, Yvonne, how we met, was on Twitter. We recognized this really great community and so much potential. You know, we knew that social media and blogging was really taking off at that time and they were brands out there that wanted to get involved and engaged with these influencers. They just didn’t know how. We saw it happening in the mommy space – Mommy blogging space. And, you know, we just, it was – I mean, of course it’s always an exciting time in social media – but at that moment it was really, it was fun, fun time, I think for everybody. You agree?

It was unique. It was really unique because we went to BlogHer, Tom and I and you, and we met face to face at a BlogHer conference. And I remember that’s where we met several pet bloggers.

I think Bev from P&G was there, wasn’t she?

No, I don’t think there was Felisa was there. Was Felissa?

There were like a half a dozen, all women – this, this, this screen you’re looking at has been my experience with BlogPaws. At the very first one I stood up on stage and opened the conference by thanking the other six men in the room of 220 for being there.

That’s where I think we looked at each other. I remember looking at each other over the table, and thinking – all of us must have been thinking the same thing – like well, if BlogHer has this for the lifestyle bloggers, because they didn’t want to be called mommy bloggers, why can’t we do it for pet bloggers? Right?

Yup. That’s the genesis, right there.

Yeah. And that’s what I remember when you guys got back from BlogHer because that was the summer of 2009, and I want to say it was early August – I feel it goes around your birthday mom – and you when you got back and you were sharing with me all your all your excitement – you were so excited – all your excitement and all your ideas and that you had met this wonderful woman, Caroline, and you you were going to start this conference. You were going to do this thing and you know me on the other side was like, “Uh huh, uh huh.”

And that’s that’s kind of my memory of you coming back and talking about that. And then and all of you getting together and, at that time, I had no idea how serious you were about your idea.

Well, and we, I think Tom and Caroline and I, we were totally like, “Yeah, why can’t we do this? Who are they to just have the corner on it?” And at that time though, I mean, Caroline Tom, you probably remember this, there were a lot of other communities popping up, also. So the mommy bloggers weren’t the only communities, right?

Yeah, Type-A Mom, I think, was around by then. And a couple of others. And, again, they all seem to revolve around women in one way or another. And to me, the big blessings at that moment were we were too dumb to know what we didn’t know.

We’d been to lots of conferences – I’ve been going to conferences since the 90s. It just didn’t look that hard to do one. And then the other huge blessing was when we couldn’t convince Chloe to join us immediately, I believe it was Caroline who knew somebody in Columbus that Rebecca was part of a firm, an event planning firm there, and we said, “Well let’s have it in Columbus, and these guys can help us.” And the smartest move we ever did was bring in Rebecca.

And we never let her go!

That’s right! And we did it in Columbus because I lived – I wasn’t living in Columbus at the time, but that’s my hometown where I live now actually, again – but, if you remember, I was like, “Well, if we do it in Columbus, and nobody shows up, I’ll just make everybody I know come.”  So brands will be happywell. Rats will be happy and yea.

Well, you knew the guy with the space. Cuz yeah, first thought of this, we thought, you know 30 to 50 people, maybe.

We thought it would be small.

And you had a friend with a space that could house 60 if push came to shove. And

boy, a couple of weeks after we launched the website, we knew it was going to be bigger than 60.

I remember that because you had initially talked about, I think you called it a pod camp or something? It was gonna be like a day, just a day. And then that even was like, “well, nope, we need more than that.” You blew it out of the water.

It was the community’s interest in it, but then it was also the brands were interested.

Yeah, we figured to do it that way. – there’s actually a website, or there used to be anyway, a wiki website for how to plan a pod camp. And they suggested between $5,000 and $10,000 budget, your sessions, your learning sessions are kind of self organizing, people put up their hand and say I can speak about such and such. And so that was how the original planning started. And we launched our website on December 9, and before Christmas we had two sponsors with checks in hand.

Yeah, that’s right. That’s right. It was, I mean, it was very unusual. I haven’t before or since been able to get sponsors or get somebody to pay to do something as easy as it was at that time. Because there was no, there was nothing, and the sponsors recognized it. They’re like, “Oh my gosh, if you could bring all these folks together, heck, yeah, we’re there.”

Yeah, and I think too, that a really big, a big part of it was that the three of us, as we were talking it out, and deciding, yeah, we’re going to do this. I don’t know. We just got along. We made decisions. And Caroline, I think you knew someone who could create a logo because you know, you’re in PR. I think, I was used to pitching the brands, so I brought Purina on board. And basically, it was just who’s going to do what and we delegated according to what needed to be done, and who could do it.

Yeah, and the complimentary skills were really great. I mean, I just enjoyed staying in the background. And, you know, I’ve been building blogs and websites and so on for years by then for us. And so I just kind of stayed out of their way and gave them the tools to publicize them.

Yes, and what I do remember is after that first event, which, again, you all came back from with such a, not just excitement, but it felt like it filled like a heart space. Like, like it was a movement, right? I remember you launched the community after that. That’s when the community opened up, after the first event. And then in May, we all, being me, my mom, and Tom, got on a plane and went to visit Caroline. And we holed ourselves up in a hotel for two days. And I would love to find those pictures because we were just writing on whiteboards, so many things.

Oh right. All those we had all those, yeah, well it’s like do you guys remember, like, I mean, Chloe you touched on it. Do you guys remember that “Don’t stop believing” song? And the video that Frugal Dugal put together and that was just like a moment of, um, I mean there were tears.

I was on stage bawling my eyes out.

Find out more from the Founders of BlogPaws by watching the full video above!

For more information on the History of BlogPaws, click here!

What To Do About Your Anxious Pet
Next Post: 15 Tweets Proving Cats Make the Best Co-workers 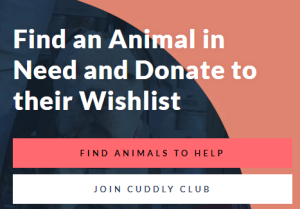