This post is sponsored by CUDDLY, and written by guest author, Jeanne Kudich from the blog Random Felines.

The rescue where I volunteer and foster mainly does TNR (trap-neuter-return) work and takes in strays. This means taking in cats with little or no background and often with medical issues. Their lives before rescue may be unspoken, but as rescuers, we do our best to stand up and make their future stories better.

The director of the rescue was at a local low-cost spay/neuter clinic when a woman walked in with a small black and white kitten in a live trap. She had tried to take the kitten to a local shelter but was told the kitten was too feral. The clinic told her the kitten was too small to be altered and released. Our director said she would take the feral kitten.

Based on the live trap and the attitude of the tiny tuxedo, I can only presume she was born to a feral cat outside. This means the first few weeks of her life would have been just a sheer struggle to survive and for her momma to keep her alive. Feral cats tend to be very distrustful of everything from loud noises to people. I can only imagine this tiny tuxedo kitten thinking how hard it would be to find food and shelter. Just struggling to not be caught by predators and avoiding dangers like people and cars would take all of her energy. Trapping feral kittens and introducing them to a home environment can be overwhelming.

After about a week I had an opening to foster at my house and was open to fostering feral kittens. I had another kitten that needed a friend so the tuxedo kitten came here. I had recently read a book where the main character rescued a pair of kittens and let his nieces name the kittens – Peanut and Goldfish. I laughed and the new kitten was christened Goldfish.

Like most rescues, we work entirely on donations. One more kitten doesn’t seem like a big deal until you realize that even if the rescue just does vaccines, dewormer, microchip, and spay, the medical cost is going to be at least $125 which exceeds the adoption fee for a kitten. The adoption fees for adults are even less. If there are additional medical costs, the need for donations is even higher.

Thankfully there are organizations like CUDDLY that allow people to search for fundraising campaigns that benefit rescues. CUDDLY is a fundraising platform for rescues, and it can also be an additional tool to help organizations help animals. The nice part is that CUDDLY supports itself with support from donors, not by taking a percentage of donations made. You can find any pet or rescue by breed, rescue, or zip code. And the best part is that pet rescues can send information to CUDDLY while doing the actual rescue and get things moving. This takes part of the fundraising piece off of the minds of rescuers, and their minds need to be on the pets.

Goldfish was spicy when she got here. She took a good amount of my mind’s energy. Fortunately, she mellowed a little with time, but she was still operating by her own set of rules. When it came time to spay her (the first attempt), she bit me out of fear. I tried again about 3 weeks later, but that time she went to the clinic in a live trap and was ear-tipped when she was spayed. Her outcome was uncertain at that point.

Goldfish was going to be a challenge. Even after working with her for weeks, she was distrustful. I discussed her outcome with the rescue’s director. She offered to take Goldfish and make her part of her semi-feral colony. She could have been added to the barn cat program, but there are cats more in need of that program than Goldfish. I made the decision that this would be her forever home. I was adopting a feral kitten. Even if she ended up like my cat Junior, who is truly a feral cat living in a house.

Thankfully after almost two years, she has mellowed. A little bit and certainly on her terms. She sleeps on the bed. I can pet her in the living room, but I have to be sitting down. She cannot be picked up. She will not allow her nails to be trimmed. We are still negotiating her next visit to the vet’s office for vaccines. I know she is lucky as there are shelters out there that would have deemed her unadoptable and she would have been put on a kill list. Obviously, her start in life still affects her current personality. I won’t ever know how she spent her first few weeks, but I can do everything possible to make the rest of her life comfortable.

I think she is happy. She has bonded with one of my other cats Chanel. She lives inside and is safe. She gets attention on her terms. I do believe she is a prime example of how animals can be helped when a good rescue is in the right place at the right time with the ability to raise enough money to help. 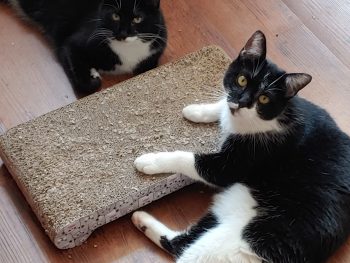 The Colony Cats rescue gets cats mainly as strays. Obviously, this leads to increased medical expenses, unknown backgrounds, and sometimes cats that just aren’t ready for the average cat home. All rescues struggle with so many things like adoptions, intakes, and expenses. The more fundraising opportunities that exist like CUDDLY, the more animals can be helped. Every dollar matters.

Right now Colony Cats, the rescue that took in Goldfish, has a campaign on CUDDLY to help three stray kittens that came in with medical needs ranging from possible hit by car and attacked by a dog. Already two of these kittens have moved on to their forever homes. The third is still recovering in a foster home. The rescue will stick by him until he is ready.

You can help by sharing your rescue pet’s unspoken story and raising awareness about the CUDDLY platform on your social channels. And, if you use #MYUNSPOKENPET in your story on Instagram or Twitter, you can even be featured on the main myunspokenpet.com site.

Have you ever fostered or adopted a feral kitten? I’d love to hear about your experience in the comments!

About the author: Jeanne has been in rescue for over 20 years doing both fostering and helping with the paperwork (a lot of paperwork). She got into fostering by accident but loved it so much she just couldn’t stop. To date there have been over 350 adults and kittens through her house. Fostering isn’t always easy, but it is certainly rewarding and there is the cute factor that always keeps her smiling.

What You Need in Your Pet First Aid Kit
Next Post: Speaking For Our Rescue Pets: Reznor, Luna, and Benji’s #MYUNSPOKENPET Stories 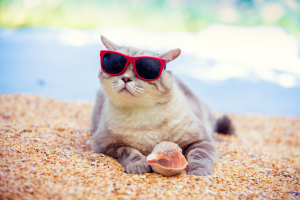